Inspired by our Narnia day, and taking the theme of winter wonderland, Emma Pickersgill and Lara Starkey won the creative writing part of our competition; whilst Joshua Cambray excelled in his picture of Narnia.

We hope they all enjoy their trip to the West Midlands Safari Park.

We are going to travel to a magic land where there is always snow and none of the plants grow,
It is ruled by a witch that has evil magic which is tragic,
So I have a story to tell so listen very well,
One day Lucy walked through a wardrobe with lots of coats later she found a lamp post,
Soon a fawn walked by at dawn,
She looked at Mr. Tumnus’s house which she could see and he offered her some tea,
Edmund came too and he had a fright but then the witch gave him some turkish delight,
which was his favourite food so he was in a happy mood,
So Lucy and Edmund left to find a another quest,
Then Lucy, Edmund, Peter and Susan all came to the land then Mr. Beaver and Mrs. Beaver helped them on the way to find Aslan the next day,
Lucy and Susan found him on a stone with his hair thrown,
Then Aslan was alive that means he survived,
Then they went to the battle it did not look good but then it turned out like it should,
When they became Kings and Queens it was as wonderful as it seams,
They all were sleepy after their quest so they left Narnia for a rest.

W Winter Wonderland
O On the lake children skate
N Now we conspire as we
D Dream by the fire
E Enough of dreaming, time to wake
R Running around everywhere like we did yesterday
L Leaping and bounding as we play
A And now in the ice covered valley, we build a snowman
N Nose of carrot, that’s what we need
D Done all our fun stuff, now home for tea. 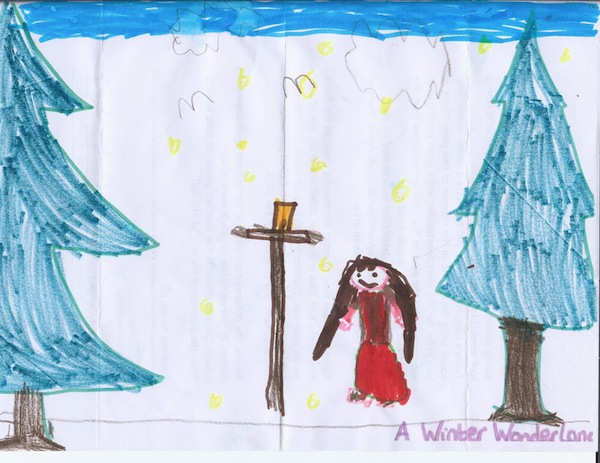