The Story of the Knighton Church Bell Turret

It all started in early 2013 when Keith Bunn was in the Turret, at the bell level, when without warning, his foot went through the floor. Fortunately it was only one foot and he was able to extract himself without difficulty or further damage to himself or the Turret.

Examination revealed that damage had been occurring for some years to the shingles of the Turret by green woodpeckers who were making increasing number of 2½" to 3" holes in the very thin Canadian Cedar shingles that had been put up in the early sixties. The woodpeckers had not only damaged the shingles but had also, on one occasion, launched a serious attack on our Church Architect, Mr John Wheatley. He escaped quite lightly as, luckily, he was wearing a thick jacket and a ‘Hard Hat’. However the damage was such that rain, especially when accompanied by strong winds, was penetrating the Turret and causing rot to develop in the internal woodwork. The Church committee decided it was time to act. 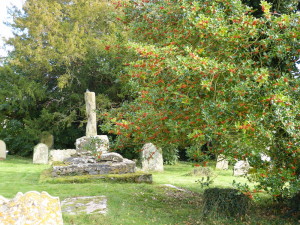 A small sub-committee was formed and work commenced. On the advice of Mr Wheatley approaches were made to English Heritage and to the Heritage Lottery Fund (HLF), the latter with a view to making an application for a grant. Among the other bodies consulted were the Diocese who gave guidance as to the requirements for granting a Faculty, the County Archive and Archaeology Department, Malvern Hills District Council and the Society for the Preservation of Ancient Buildings. In addition inspections had to be carried out by a firm of experts on ancient timbers, a Structural Engineer, and a Bat and Protected Species Survey was also completed. A ‘Dendro-dating’ was also carried out. This is achieved by drilling the timbers in such a way as to obtain samples showing the annual rings in the wood. This has revealed a good deal more information as to the date of the various parts of the Turret and other areas of the Church and the new information will be incorporated into a revised history of the Church.

This work led to an estimate of the likely cost of the project which, after input by various of the above agencies, came out at a little under £100,000. Several events in the village raised about £21,000 and this included an extraordinarily generous donation of £12,000 which, with Gift Aid, amounted to £15,000.

Meanwhile the very long, and rather tortuous, process of making the application to HLF went ahead. This can only be done ‘on-line’ and consists of a seemingly endless series of different forms, some of which appear to have a life of their own. This not to say that our contacts at HLF in Birmingham were ever less than entirely friendly and helpful. However the advice would be that anyone contemplating a similar project should think seriously about employing an expert on such matters to make the application for them. We discovered, rather too late, that the costs of this can also be included in the application.

Eventually we reached the point where our Faculty application was approved and HLF undertook to cover some 77% of the costs which, with our fund-raising, covered the expected total costs just about exactly. We are still not quite sure what the eventual total will be. As it progresses, the work may reveal further previously unknown damage and may increase costs. Meanwhile we hope that the contingency funding allowed for in the estimates will be sufficient to cover any such cost.

From the start of the project in February 2013 it has taken two and a half years to the moment when construction of the scaffolding started on 9th September; we understand that this is about par for the course. Since then the work has been progressing well and we expect to be complete by early next Spring; fingers crossed, whoopee!