An article for April from the Dean of Worcester 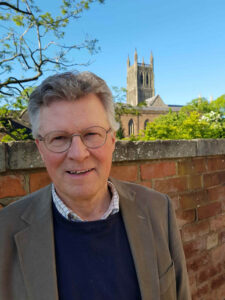 What will Easter bring for the people of Ukraine? I write these words at the beginning of Lent, and the situation is so fast-moving that whatever I write will soon be out-of-date. But we already know that for hundreds of thousands, at least, Easter will bring heartache: the heartache of bereavement, of injury, of loss of home and livelihood, of exile in a strange land. And anger too, for all of us: anger at a war so stupid, so unjustified, so economically crippling, so distracting from the still greater crisis of the climate and the environment, so perilous on so many levels for the whole world. Anger is the only appropriate response at colossal wickedness.

Let us pray that the Easter faith which so transformed those first disciples will take root in our hearts as well. ‘Neither death, nor life, nor angels, nor rulers, nor things present, nor things to come , nor powers, nor height, nor depth, nor anything else in all creation, will be able to separate us from the love of God in Christ Jesus our Lord’.