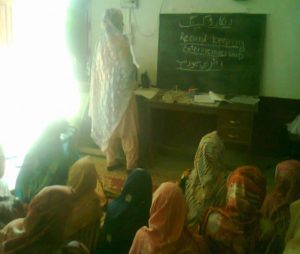 These pictures come from the North West and Tribal Areas of Pakistan. As they show the area is poor and conservative – the village elders are meeting in the open air not an office, the classroom is not well equipped, the women are veiled and do not appear in the same photo as the men. What you cannot see is the literacy rate among women in the Tribal Areas, (3%), the lack of legal work, the absence of health services, the drones which target the Taliban and kill others as well, the bomb blasts in the more settled areas or the recent fighting in Waziristan which displaced over three quarters of a million people.

What you do see is some of the work of Khwendo Kor a local Pakistani organisation which works for women and children and which your church has chosen to support. The Khwendo Kor teacher is providing education for girls, something the Taliban who may hold de facto power in rural parts often vehemently oppose. This is very dangerous work and staff have been shot and kidnapped but Khwendo Kor survives through its courage, dedication and unique approach to its work. 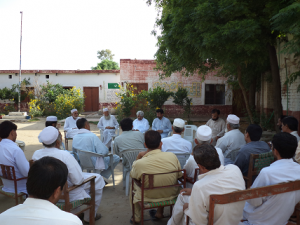 As throughout the world the people here want jobs, and access to healthcare, clean water and education. At the same time there is a deep distrust of the West and aid workers have been killed for seeking to promote polio vaccination. Despite this Khwendo Kor works on health, education, particularly for girls, and microcredit (particularly small loans to enable women to set up business) and response to emergencies – the floods, earthquakes and man-made disasters that feature so often in that part of the world. It manages to do this because it is a local organisation that takes great care to agree its work with the people it is trying to help. It does not work in villages without the agreement of both the men (hence the photo) and the women; it recruits local women and trains them as teachers; it ensures that local committees oversee the school and its premises; and it trains the local women who act as ‘birth attendants’ in safer practices.

In these way Khwendo Kor gains acceptance in the local areas and this makes their work safer and spreads it as other villages want its benefits. It also provides a spring-board for the other strand of their work which is to advocate for the villages with the local administration while enabling them to put pressure on local politicians. The picture at the bottom left is of women getting the identify cards needed to vote. Voting parents are more likely to be heard. Related activities include campaigns for better education for girls, for the development of the Tribal Areas and rights for women in respect of inheritance and domestic violence, something on which they work with local Imams. 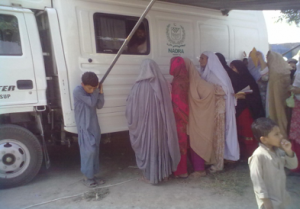 One page cannot give a picture of the coherence and achievements of this work. For greater depth, Google ‘Maryam’s mission’ a powerful and beautifully photographed account of challenges faced by the staff. The link https://vimeo.com/143713788 gives a recent, short promotional video which covers more ground, more vividly than I can here. Finally you can visit www.KhwendoKor.org.pk and/or www.frok.org.uk for more written material. The latter is the website of the UK Friends of Khwendo Kor, a UK registered charity set up to support Khwendo Kor. As its vice-chair I thank you all very warmly on its and Khwendo Kor’s behalf. This is a truly worthwhile cause.