The black and white photograph below shows a long forgotten, disused, neglected, ivy clad, but much loved iron footbridge that originally spanned the A443 at Eardiston near Tenbury Wells. 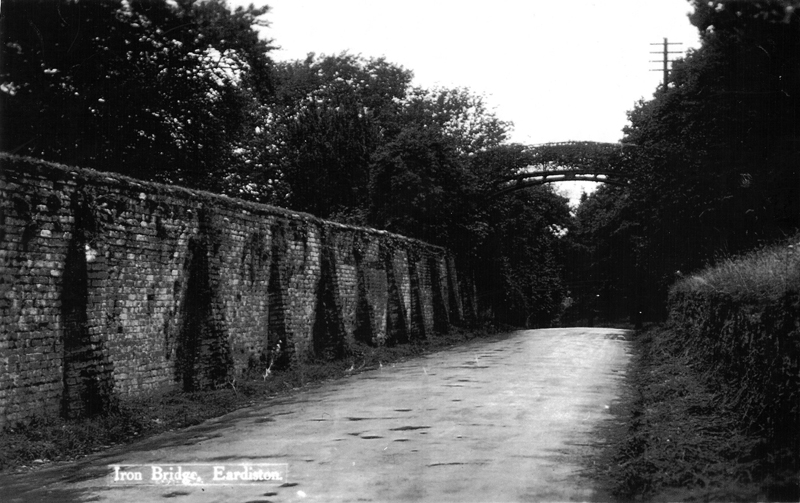 The bridge had originally been installed to provide a link from the gardens of Eardiston House, at the time the residence of Sir William Smith III, Bart, to provide access to his Pleasure Grounds situated in the fields opposite. (The remains of the original Tennis Court can still be seen.)

The bridge weighed some 4 tons and was cast in 1825 at Baldwins Iron Foundry in Stourport. (The Baldwin family were owners of several industrial factories in and around Stourport. One of the family, Alfred, was the father of Stanley Baldwin, British Prime Minister in the late nineteen twenties and early thirties who represented Bewdley in parliament.)

Local legend has it that a then young Princess Victoria in 1835, before she became queen in 1837, was invited to cross the bridge to partake in a game of tennis. Apparently at the time she was staying as a guest of the then present Earl of Dudley, who resided at nearby Witley Court. She had been invited to Eardiston House for a days’ entertainment. This then begs the question, was it around this time when it is believed she visited Tenbury Wells and is said to have coined the phrase My little town in the orchard? I for one would certainly like to think so, although no records exist that she actually said this. It is a fact that on one of her journeys she did call in at the Swan Hotel at Tenbury for a change of horses that were pulling the coach she was travelling in. It seems that a local landowner offered her as a gift a box of apples and it is thought she renamed them ‘Princess Pippin’.

Several local residents still relate fond memories of the footbridge, one in particular being Ray Jenkins who recalls, when as a pupil at the local Lindridge school, the happy hours spent at the annual picnic parties at the house and of crossing the bridge to the pleasure grounds opposite.

Charlie Bridges also remembers as a child crossing the bridge to the pleasure grounds to partake in childhood fun and games. He particularly remembers an Aunt Sally type of figure with a pipe in its mouth, at which children would throw objects to try knock the pipe out!

Olive Jenkins remembers the many fine specimen trees that once grew on and around the pleasure grounds. Sadly several that stood adjacent to the A443 were removed, possibly when the bridge was taken down to allow road widening to take place, and some time later three fine oak trees became victims of lightning strikes. She also remembers bridge being covered in Virginia Creeper, especially during the Autumn months when the leaves were at their most colourful.

The bridge being quite unique, not surprisingly during its final years, became a magnet for the local youngsters. Out looking for a bit of sport, they would climb onto the bridge and play tricks by dropping clods of earth and other objects on any unsuspecting passing traffic below. Apparently, on one occasion a person from Knighton on Teme whose car had been a victim reported the incident to the police. The suspects, all local lads were soon apprehended and in turn interviewed. Initially all denied involvement, but after more questioning one of them eventually owned up and gave the names of the others. Tom Preece told me recently he was one of them along with Jim (Banger) Fidoe and several others.

Around 1966 a directive from the Department of Transport at Worcestershire County Council said the bridge would have to be removed, stating that it didn’t meet with the regulations of the time. Although the bridge was unused and in a dangerous state of repair, and probably an eyesore, there was a lot of local opposition against it’s removal, probably due to it’s obvious craftsmanship, and it’s historical links with the past. However, after much debating it was finally decided it had to go. Rather than having it broken up for scrap, it was decided that a buyer would be sought, and several parties expressed a interest, including the Worcestershire County Museum, housed even then in a section of Hartlebury Castle.

The eventual purchaser was a Dr D.H. Edmundson who resided at Huddington Court near Droitwich. The bridge was then dismantled, along with the adjacent wall stones (which are thought to have been buried somewhere on Frith Common, Lindridge). The bridge was then transported the 25 miles or so to its present site, restored to its original condition, and re-erected as a feature spanning the moat that surrounds Huddington Court where it still stands proudly to this day. 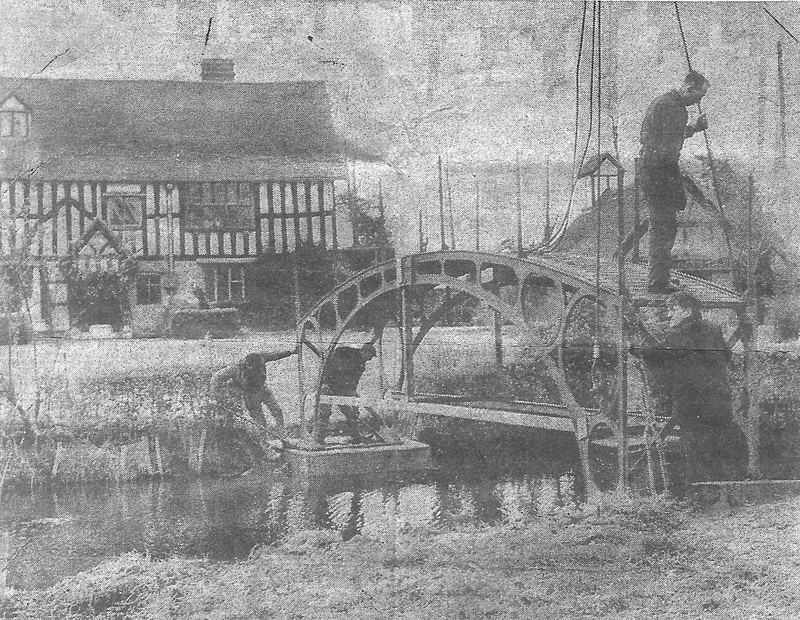 I have recently corresponded with the present owner, the son of the original purchaser, who now lives at Huddington, and he assures me that it is in safe hands, and is still in excellent condition.

A similar bridge still stands over the road adjacent to Spetchley Park near Worcester.

Compiled by Derek Marks
My main interest in the bridge is because I live near to where it originally stood, and I can remember travelling underneath it as a child.

Footnote on Huddington Court:  Huddington Court is a half timbered Elizabethan Manor house, and was the ancestral home of the De- Wyntour brothers Robert and Thomas, two of the original conspirators of the failed Gunpowder Plot of 1605. The house remained in the hands of the family for another 53 years until the death of Sir George Wyntour in 1658. The house is described by Nikolaus Pevsner in his county Buildings of England guides as “the prettiest house in Worcestershire”.