A Farewell to Pensax Thrift Shop

In November 2014, as part of their World War I commemorations, Knighton compiled this roll of the First World War Dead who are commemorated in St Michael and All Angels.

In November 2014, as part of the World War I commemorations, Lindridge Church compiled a set of brief biographies of the Servicemen from Lindridge who lost their lives in World Wars I and II and who are remembered and honoured on the War Memorial outside St Lawrence.

You can read it online here, or download a leaflet suitable for printing.

In March and October 2013 Stephanie Mocroft gave an illustrated talk on the history of Lindridge. In July 2014 she updated the text and added some photographs and kindly allowed it to be published here.

The History of Lindridge in Four Objects

Janet Faraday, who grew up at The Moor Farm in Eardiston in the 40s and 50s, has written the following account of her memories on the farm during the second World War.

Memories of the War Years at the Moor Farm

The following articles were written by Derek Marks and previously published in Temespan.

The Kington, Leominster and Stourport Canal
The Pensax Coalfield
The River Teme: Was it ever navigable? and Meadows Mill
Eardiston House and Estate
Sir William Smith and Family at Eardiston
The Footbridge at Eardiston
The Wallaces at Eardiston

Derek Marks – 1937-2013     Derek lived in Eardiston for 37 years and his contributions to village life were many and varied. This was recognised in 2012 when the Parish Council presented him and his wife, Janet, with an award for 30 years service to the community. 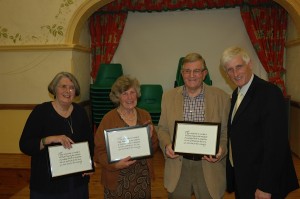 He was a great source of local knowledge and spent much time researching the local history of the area, amassing a marvellous collection of photos and newspaper cuttings documenting village life down through the years. Many will remember enjoying the local history exhibition he was instrumental in putting together for the Lindridge Parish Hall centenary celebrations in 2010. He wrote various articles for Temespan, and many of these were later adapted for the pages you can see here.

If you have local history information, or stories to tell, and would like to see them published here, please contact me at temevalleynorth.webmaster@gmail.com.