The Parish of Teme Valley North comprises the churches of Knighton-on-Teme, Lindridge, Pensax and Stockton-on-Teme.

St Michael and All Angels, Knighton-on-Teme 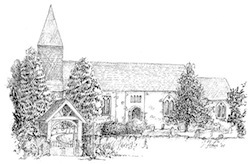 Before you even set foot inside this very beautiful twelfth century church, you may be distracted by the ancient preaching cross nestling beneath the yew tree in the churchyard. Preaching crosses such as this enabled anyone to preach, priest or not, and often predate the church. Once inside, marvel at the outstaanding Norman features, including the chancel arch. 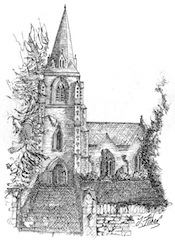 There has been a church at Lindridge for many centuries. All Saints church burnt down some time after 1650 in a fire believed to have started in a bundle of straw used for seating. Following an ancient tradition, churches built on the site subsequently were dedicated to St Lawrence. The present church was built in 1862. Many of the windows have unusual pastel shades of glass which cast attractive patterns when the sun shines through them. 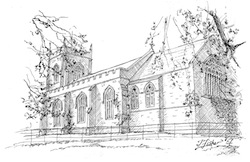 Built in 1832 on an ancient site, this church is a treasure well worth seeking out. The bells, which previously hung in the tower, are placed at the back of the church giving visitors the opportunity to view these impressive instruments at close range. The churchyard provides an oasis of peace to all who seek a moment or two away from the busyness of the daily round. 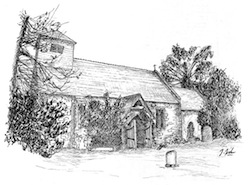 Dating back to the twelfth century, it is believed that the Norman church of St Andrew’s, with its fifteenth century oak porch, has Saxon origins, shown by its unusual circular graveyard. The church boasts many medieval features, including a rare ‘squint’ between the main part of the church and the altar area, which allowed the congregation to glimpse what was happening at the altar.

Contact details for each of our Churches as well as for the Parish Ministry and Administration teams can be found on our Contact page.

Postcodes of locations close to the Churches useful for Sat Nav systems are as follows, together with links to their location on Google Maps:

With many and grateful thanks to Jason Fisher for the drawings of the churches shown here.