The time-period I have chosen is the Georgian Age. King George the first (1714-1727) was on the throne and his reign proved to be a period of stability, its only disturbance being the Jacobite rebellion. The population was beginning to increase and improvements to land fertility and drainage were being made, although the agricultural and industrial revolutions were yet to come. 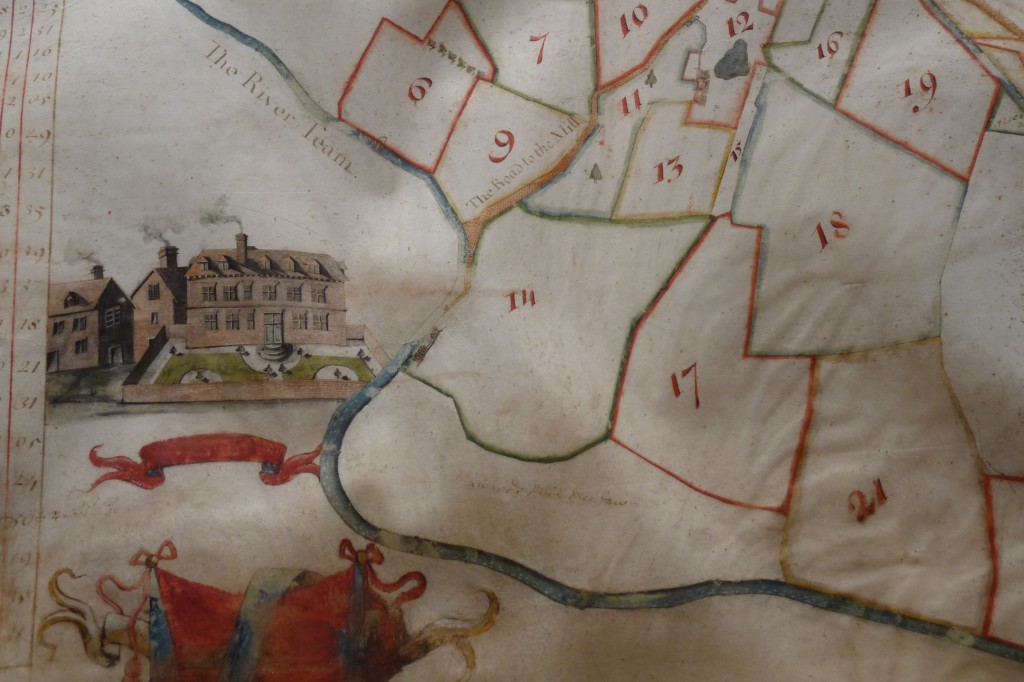 Photo showing part of an estate map of the manor of Moor, 1721 – click to enlarge

The final object is an estate map of the manor of Moor, made in 1721 by a surveyor called John Dougharty. Situated in the Eardiston area of Lindridge, this manor, whose house and farm still bear its name, was one of the principal manors, that is, estates, from pre-eighteen century times. It appears to have supplanted the Eardiston manor, which, with Knighton manor was one of the two main manors of the area mentioned in the Domesday Book of 1086. The 15 hides mentioned there echo the 15 hides of the eighth century.

Manorial estates were the main small administrative units of the Middle Ages, and regulated the lives of the rural population. A manor was a self-contained area of land, sufficient to support the lord of the manor and his family, and all the other people who lived there. There was a strict hierarchy of inhabitants, all of whom paid for their landholding in one way or another. This was delineated by the customs of the manor, and which we saw breached in the 1560’s. The lord of the manor held it, for fees, from the Dean and Chapter of Worcester Cathedral, who held it in turn from the crown. Fees might be sums of money, surrender of livestock or crops, days of labour, or provision of men to fight in wars.

Each manor would have access to water, also possibly to a river or fishponds, meadowland, pastureland, arable land, rough or heath or moorland and coppice and woodland. This would enable all the functions of sustainable living to be carried out.

The name of Moor is mentioned as far back in Worcester Priory accounts as 1215. It was then known as Mora, and its lease was extended to the then occupants for a further 16 years in that document.

Administration of the manor, the paying of fees, the admission of people to holdings, minor crime and local disputes were all carried out in the manor court. This took place at The Moor on a regular basis and everyone had to attend. Examples of matters dealt with ranged from complaints about straying animals, unmaintained paths or hedges and blocked streams to personal misdemeanours such as poaching, fighting or committing adultery. The local manor court continued to meet until the 1920’s after which its responsibilities were transferred to the Ecclesiastical Commissioners.

The manor court proceedings were carefully recorded in books which detailed the business, and a clerk was sent out from Worcester to conduct the business, listen to disputes and, most importantly, collect the payments. These books make interesting reading. They contain details such as how much the clerk, who lodged at The Moor, paid for his meals and transport. “Returned to Worcester, being prevented from going to Lindridge by heavy rain and deep floods”, is an entry for 9th September 1774”. Nothing changes!

In 1721 surveying techniques had greatly advanced and estate maps with accurate representations of land became popular among the gentry. Scientific principles were now being applied to map-making and accurate measurements of distances, angles, and latitude and longitude could be made. Triangulation replaced the less accurate road traverse method of gauging distance. The use of measuring chains and rods was employed in the field.

A father and son team of Irish surveyors came to Worcestershire and, between 1700 and 1760, made maps for the local landowners of the day. More than twenty are still in existence, many held in the county record office. The map of The Moor is in private ownership, but a photocopy of it is kept in The British Library in London.

The map is a highly decorative and attractive representation of the manor of Moor. It measures 27” by 32” and has a scale of 13” to the mile. It is rendered in ink and watercolour on parchment.

The map shows an area of 237 acres of land in the east of Lindridge parish, all of which was enclosed. It also refers to a further 14 acres, which are not shown, which lie within common fields. “Enclosed” land refers to land with a perimeter hedge or fence. This is of interest because enclosure of land began in the fourteenth century, after the Black Death and was not completed until the beginning of the nineteenth century. Here we see a combination of open field farming and enclosure running in tandem. The open fields would have had individual strips allocated to different parties.

On the map, the fields are outlined in colour and some have coloured trees painted in them, presumably to denote orchards. Each field is numbered, and two sets of tables detail the field-names and their acreages. Two roads are shown, these being the road to Tenbury and the road to the mill. The River Teme is coloured blue, alongside is Meadows Mill, and to the east is a brook shown entering the Teme, Dumbleton Brook. The mill, along with other buildings, is drawn in perspective. Also featured are a heraldic cartouche and a compass rose with a fleur- de-lys indicating north. The perimeter of the map is decorated with an elaborate border, in bright red, showing mythical animal heads entwined in an encircling design of strawberry leaves and fruits. This is thought to have originated from a draughtsman’s manual.

Of great interest is the large inset drawing of a house. It is a substantial brick building with an adjacent wing. The parterre garden, in front, is surrounded by a wall, and smoke is coming out of the chimney. This is the manor house of Moor, lately inhabited by the hop-processing company Botanix. It is situated to the east side of Mill Lane, Eardiston, and is still clearly recognisable as the same building today. Eardiston House is also drawn and has an adjacent group of trees, not shown in lines like the field trees, but in an informal group, which I take to be parkland.

The Dougharty family came to Worcestershire at the turn of the eighteenth century and this map was made by John Dougharty senior, who died in 1755. It was made for Edward Wheeler, and I wonder if, like Ralph Sheldon, he had it made to show that he had built a fine new house. It is in Georgian style and, just like Sodington Hall, it is built on an old moated manor- house site. Indeed, the moat is still there, and still has water in it!

The Wheeler family was a very influential local land-owning family. At one time their estate at Newnham covered 1400 acres, and stretched from Lambswick in Lindridge, all the way to Tenbury. There are many branches of the family, and interestingly, another family member built a house in the same year as the map is dated. He built Kyrewood House, just outside Tenbury in 1721.

The Edward Wheeler of this map, (there were many Edward Wheelers!) inherited The Moor from his grandfather. It had been in his family since at least the second half of the seventeenth century. In the previous century it had belonged to the Hereford family. Edward Wheeler was born in 1677 and died in 1753. He married twice and had a large family. His son, also Edward, lived at Lambswick. Allen Wheeler, a younger son, died at The Moor in 1785, and there is a memorial displayed at the back of Lindridge church commemorating him. In the tithe account for 1797, there is a John Wheeler present at The Moor, so the family had a presence there for well over a century.

In 1721 Edward Wheeler would have been 44 years old, in his prime, and clearly wealthy enough to commission a decorated map of his estate to take his place among the other important land-owners of the county. His grand-daughter married William Smith in 1780. This latter man took on land in the parish in 1781, and eventually incorporated the lands of The Moor into the Eardiston estate. This estate was a highly successful and forward -thinking agricultural venture, and became one of the foremost agricultural enterprises in the land.

Lindridge does not abound with Georgian buildings, unlike nearby Bewdley, but the Worcester Guildhall, which was previously mentioned, also happens to date from 1721. A further beautiful estate map, this time of Lindridge church glebe land was made 40 years later, but that will have to remain for another day! 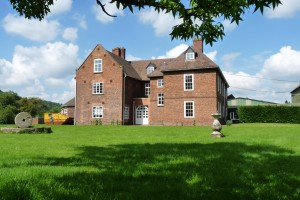 The Moor, Eardiston, as it is today