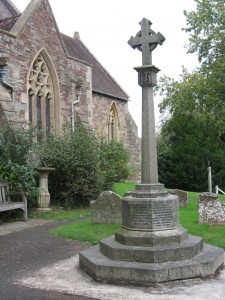 Lindridge War Memorial is sited immediately outside the main door of St Lawrence’s church, overlooking the beautiful Teme Valley. The memorial sits on three octagonal steps and has an octagonal plinth with five panels inscribed:

PEACE TO THE UNCONQUERED
MAY LIGHT PERPETUAL SHINE
UPON THEM

Brief biographies of those who died in World War I

Brief biographies of those who died in World War II

They shall grow not old,
as we that are left grow old.
Age shall not weary them,
nor the years condemn.
At the going down of the sun
and in the morning,
we will remember them.

We would like to acknowledge our grateful thanks for all the help and encouragement received from so many people during the compiling of this record, in particular for census and military information gathered from various sources by Mrs Alvina Shore for family memories and documents shared by Meg Rudd, Edna Knott and Rachel Lambert for biographical details contained in For Sovereign and Country a military review of Tenbury Wells & District, compiled by Roy Winton.

The information presented here is also available in booklet form which you can download here.

If you would like to receive a copy of the booklet, either paper or e-version, and/or if you have further details about any of the men recorded here that you would like included in the booklet, please contact Pauline Briggs at pauline.briggs8@btinternet.com or on 01584 881 216.