Following in the footsteps of the Worcester Pilgrim, by Bishop John 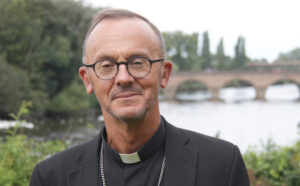 In 1987 the remains of a 15th Century pilgrim were discovered at the base of the tower of Worcester Cathedral. We know he was a pilgrim because he was buried with a staff and a cockleshell. The cockleshell was carried by medieval pilgrims (of which there were thousands) to Santiago in Spain, to the site where tradition has it that Jesus’s disciple St James is buried.

My wife, H-J, and I decided to follow in the Worcester Pilgrim’s footsteps but use bicycles. We have just returned from cycling over 1000km on the ancient pilgrimage route to Santiago from the Pyrenees. That route is known as ‘the Camino’, ‘the way’. Whilst on it we passed thousands of modern-day pilgrims from all over Europe and beyond. Since we were cycling, we generally went a bit faster than the walkers. Every time we passed someone, we greeted each other: ‘Buen Camino’. There’s no adequate English translation of that salutation but it’s a wonderful one. I suppose ‘go well’ is probably the nearest.

Jesus is described as being ‘on the way’ a lot in the New Testament and Jesus himself is described as the Way, the Truth and the Life. The Greek word for ‘Way’ is first used to describe the Christian faith in the Acts of the Apostles. That, we can infer, is how early Christians described their faith. That’s how Paul referred to himself in his trial before Felix: ‘I admit that I worship the God of our ancestors as a follower of the Way.’

We’re all on a journey. Pilgrimage is a good way of understanding our lives: it gives them meaning and purpose. In this diocese we are on a journey together, being transformed as we seek to fulfil our Kingdom People Vision, living out values of love, compassion, justice and freedom. As we do so, we hope to become a healing presence in our communities.

Another greeting of medieval pilgrims on the way to Santiago was ‘Ultreia’, a Latin word meaning ‘beyond’. Those of us who choose to travel with Jesus ‘on the way’ believe we are on a journey beyond the here and now, beyond this life. I wish you a buen camino on that journey.