For the first object I have chosen something from the end of the Neolithic period. To explain its significance I shall begin much further back, indeed 20,000 years back, to the last Ice Age.

At that time much of north-west Britain was under an ice sheet up to 1.5 kilometres thick. This part of the Teme valley did not contain a glacier, but arising from the west was a glacier that reached Woofferton, in Herefordshire, and from the north was another, which reached down to Morville, in Shropshire. These were the latest in a series of glaciers which covered Britain over a number of ice ages over geological time. When the most recent interglacial period began, and temperatures rose, the ice melted and the glaciers retreated. Global warming was rather more welcome in those days than it is now!

Here in Lindridge melt-water would have drained into the valley, and although older theories of large glacial lakes are now not thought to have existed, there would have been some water collecting east of Woofferton. In previous interglacial periods, rivers in the valley flowed westwards to join the Wye river system. The presence of ice at Woofferton during the most recent ice-melt prevented the previous situation from re-establishing, and the river reversed direction and found a new passage. At Stockton-on-Teme the now eastwards-flowing river executes a right-angled bend southwards to avoid the Abberley range of hills. It then carves a course through the Knightsford Gap, at the bottom of the Abberley range, between Ankerdine Hill and Osebury Rock. Another right-angled turn puts it on track eastwards to Powick, where the Teme joins the River Severn. This route, as it prevails today, was established from a date of about 14,000 years ago.

Much glacial evidence remains in the local landscape. The gentle undulating hills within the valley represent a process known as solifluction, where the top layers of permafrost melted in summer, allowing the top six feet or so of ground to slide down over its more-frozen base.

The surface-water drains to the east today, but the ground-water still follows underground channels to the west, as in previous inter-glacial periods. This mismatch contributes to the flooding that occurs in Lindridge to this day.

Global warming had a further beneficial effect when, about 10,000 years ago, in the “fertile crescent” of the Near- East, a chance hybridisation of two grasses led to the creation of a new plant. This was emmer wheat, the precursor to our modern wheat. The people of the time spotted the potential of emmer wheat. It had large and highly nutritious grains, and to increase its supply they began to plant, nurture and harvest it. This was the greatest change to life that mankind has ever seen, the development of agriculture.

In the Teme Valley vegetation had moved in following the disappearance of the glacial lake, and subsequently the land became forested. The first trees to colonise were birch, aspen and sallow. Then came pine and hazel, then alder and oak, followed by elm and lime. This latter tree is of particular interest to us because Lindridge means “linden ridge”, in other words, “ridge of lime trees”. East of Newnham Bridge a low ridge of land arises and it is easy to imagine this covered in lime trees. We know that in the immediate post-glacial period lime was more common than it is now. The rarer small-leaved lime lives on in the valley, particularly in the characteristic dingle streams that flow into the Teme. They are important features, thankfully conserved in our local nature reserves at Hunthouse Wood and Hanley Dingle.

From 4,000 BC Neolithic people crossed the Channel into Britain and, moving along the river-systems, introduced agriculture to our land. They brought with them livestock, their grains, emmer wheat, barley and rye, and their all-important farming knowledge.

To graze animals and plant crops they needed to clear land, and for that task they needed tools. Their tools were stone, and the first object I have chosen to look at in this account is a polished stone tool from Lindridge. 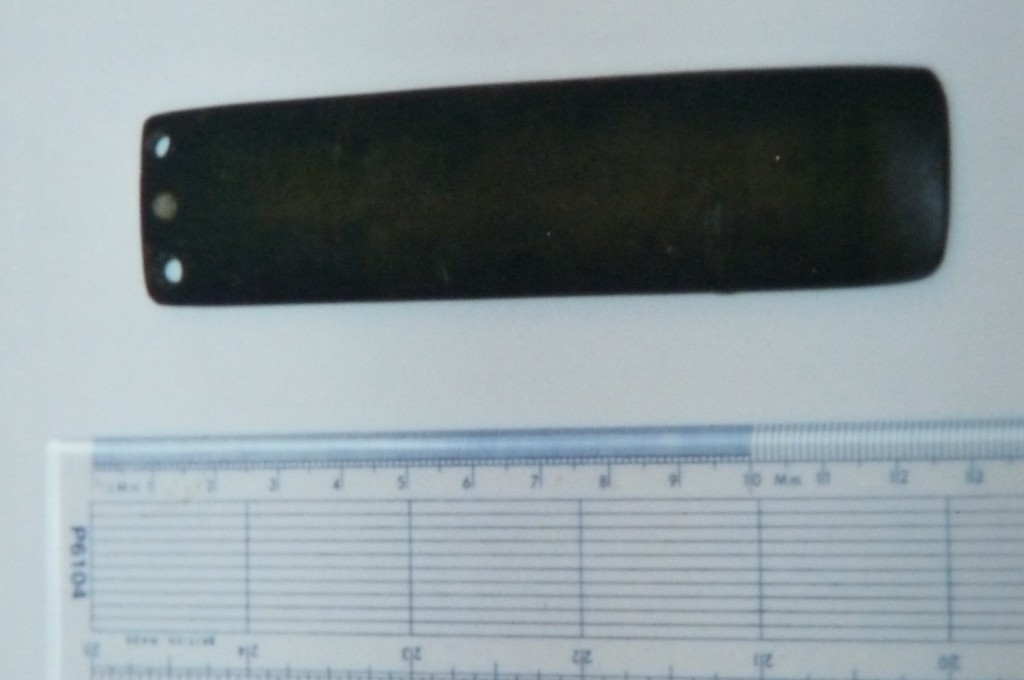 It was found in our parish at the end of the 1700’s. We are lucky to have a Neolithic artefact because across Worcestershire as a whole there is little remaining from that time. The two most obvious remains of Neolithic times are the landscape features of henge monuments and long barrows. We do not have either in Worcestershire. The nearest henge to us is a stone circle called Mitchell’s Fold, just north of Bishop’s Castle. It is in Shropshire and may actually date from the Bronze Age rather than the Neolithic. In Herefordshire, at the head of the Golden Valley, at Dorstone, is a very impressive long barrow called Arthur’s Stone.

The Lindridge stone tool I am going to describe was found at a site called a Toothill, situated just to the west of Featherbed Lane, in the Dodenhill area of the parish. Toothills were low, manmade-looking hills, rather like lookout posts, which caught the imagination of antiquaries in times past. There is no hill on the site now, but a later field name is given as Foothill. It appears to have been flattened when eighteenth century workmen dug into it, finding the artefact six feet down, in a bed of gravel.

The tool is made of dark greenish-grey stone and is finely polished. It is 4 ¾” long, 1” wide and ¼” thick. At one end is a sharpened cutting edge. At the other are three holes drilled into the stone, two drilled fully through and the central hole only partially through. I assume that these were to attach a handle to it. In the nineteenth century a description of it was published describing it as flaying knife or chisel.

At the time it was found there were no archaeologists. Those interested in old things were called antiquaries. Our object was acquired by a local antiquary, the vicar of nearby Witley.

Before finding out what happened to it next I will first address where it might have come from. Stone suitable for making stone tools does not occur naturally in our county. Such material has to be hard but workable, and capable of maintaining a sharp edge. We know that stone tools were traded across Britain, and to and from the continent, as they had been for millennia. A well-known trade route, the Clun-Clee Trackway, was operating in Neolithic times and runs just to the north of here. It started at the Kerry Hills and led to the Severn at Bewdley. The tool thus could have been made of Welsh stone. We know that Welsh stone was known of and valued in other ways, because stone from the Preseli hills was transported to Wiltshire to build Stonehenge.

Back to the article in question. The vicar of Witley gave the artefact to the museum of the Natural History Society in Worcester, where it was one of the founding exhibits. Lindridge can again claim a hand in the story, because the Worcestershire Natural History Society was founded in 1833, at a meeting held at the Guildhall, Worcester. In the chair was Sir Sidney Christopher Smith, second baronet of Eardiston and son of William Smith, founder of the Eardiston estate.

The museum is now called the Worcester City Museum and Art Gallery and although it still houses the tool it is no longer on public display. 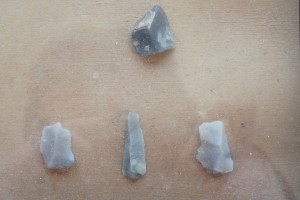 Other stone tools have also been found nearby. From this parish, a large hand axe and a loom weight are described in detail on the database of the Portable Antiquities website. From across the Teme at Eastham, a large collection of flint tools was discovered in 1936 during excavation for the New Road at Hanley William. Some of these are held locally by Eastham Church.

In summary then, this is an object found a long time ago, making its way briefly into county history, but now stored away for safe-keeping. Recently the tool has been looked at again. A group of early Bronze Age artefacts known as “bracers” from museums across the country has been looked at. Our Lindridge artefact was included. Unfortunately the stone type and origin was not determined and the sharp edge on one side of it did not fit with the other bracers. It was suggested that it might have been broken and re-used in antiquity. Bracers are stone rectangles with holes drilled for fixing. No-one knows what they were used for, but the suggestion that they were used to brace the wrist and protect it from an archer’s bow came up in the nineteenth century. A famous tomb called “The Archer’s Tomb” was excavated in Wiltshire, and a stone object, like those described above, was found positioned next to an ancient skeleton’s arm.