Leaving the Stone Age and moving forward past the birth of Christ, my next stop is the end of the eighth century. Lindridge is now in the Anglo-Saxon age and within the kingdom of Mercia. The name comes from an Anglo-Saxon word meaning boundary, also the derivation of the term The Marches. The date-range of object number two is 781-796 AD. King Offa was then the local ruler, and a powerful one at that. He ruled a very large area, from the Welsh Marches to East Anglia and from the Thames to the Mersey. He was responsible for commissioning the boundary dyke which bears his name. Offa’s dyke lies barely twenty miles to the west of Lindridge parish.

The object I have chosen is a legal document of a type called a land charter. This is a conveyance of a piece of land from one party to another. The land was defined by means of a method called a perambulation. In other words, the boundaries of the land were circumnavigated, and all of the significant land features were noted down in writing. The features included hills, large stones, rivers, streams, watersheds, old trees and old walls. They were features fixed in the landscape and thus not liable to change or to dispute. 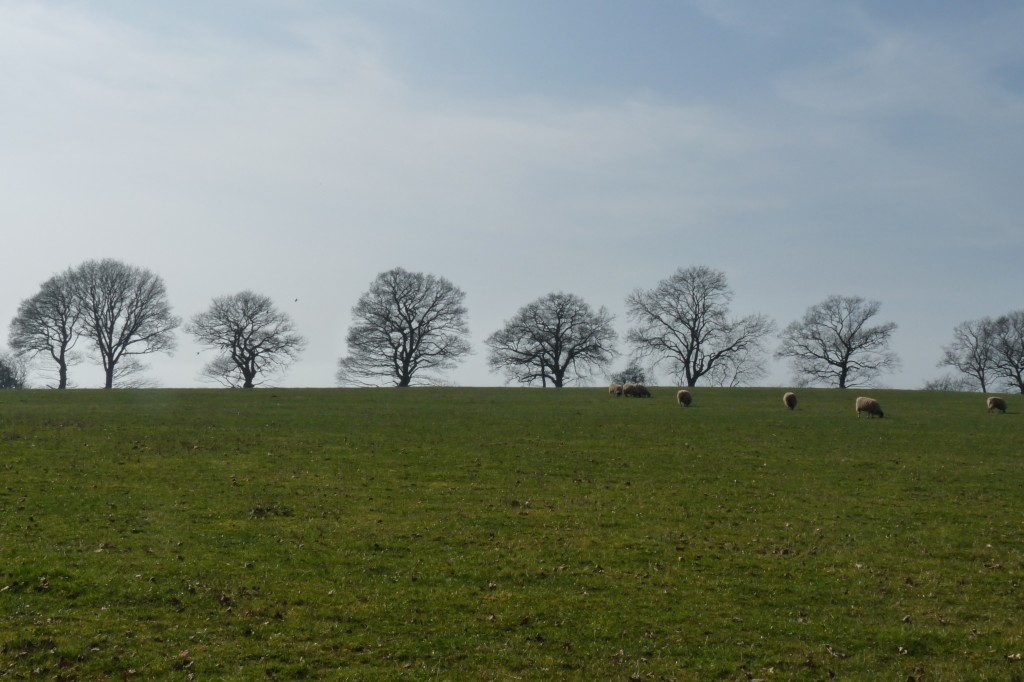 An Anglo-Saxon boundary:at the top of Frith Common, between Lindridge and the "Sodington peoples’ boundary"

Worcestershire has a large number of Anglo-Saxon land charters still in existence. They are held in the British Library in London. We are fortunate, because in many parts of the country charters were destroyed in the ninth century. Viking raiders were particularly good at putting monastic buildings, which housed the documents, to the torch!

The charter describing Lindridge does not mention the actual word Lindridge, although it is clearly the same land. It mentions Knighton, Newnham and Eardiston, Eardiston in the form Eardulfeston ie the ton or estate, of Eardwulf, our local Anglo-Saxon. The piece of land is measured as being 15 hides. This is not an exact measurement of area, but a device for calculating taxes. The term first appeared a century earlier. It has variously been interpreted as 120 acres, land necessary to support an important family, and the area of land ploughable in a year.

If it approximates to 120 acres, when multiplied by 15 it falls very well short of the land acreage it describes, this latter figure being in excess of 6,000 acres. I assume that the land of the hide was the land that was actively lived on and worked to support its inhabitants.

What is significant about the charter is that the boundaries that it describes are exactly the same as those on the most up-to-date Ordnance Survey map of today. That represents a survival of twelve hundred years!

Given their antiquity, I wonder how old they were when the scribe set them down at the close of the eighth century. It is thought that all land in England was under someone or another’s ownership as far back as the Bronze Age. Such a thought would double the twelve hundred year age that I have just indicated. Are our boundaries, which we cross so regularly, really so old?

The Lindridge charter describes a gift of land to the church of St Peter, Worcester, which was the cathedral church, by an Anglo-Saxon man, Wiferd and his wife Alta. The ecclesiastical see of Worcester had been established in the previous century, the seventh century, but interestingly, in 796 AD, the county of Worcestershire had yet to come into existence. 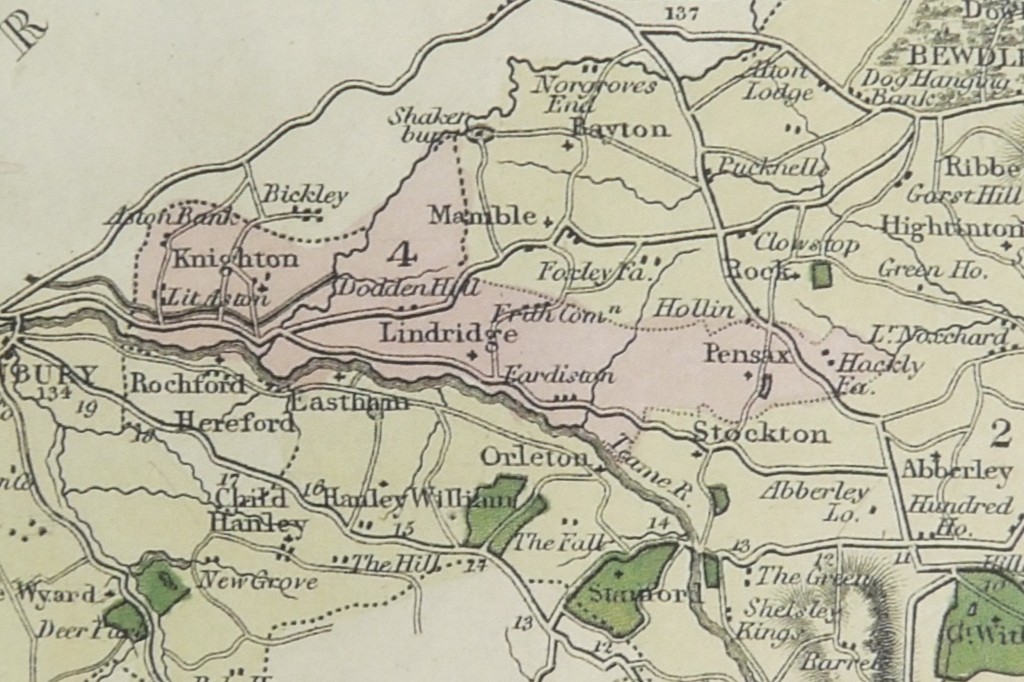 Let us look at the boundaries. They are noted down with admirable succinctness. The Anglo-Saxon scribes clearly did not waste parchment or ink!

The charters usually used a clockwise perambulation, starting at the bottom right-hand corner. Ours starts at the bottom left-hand corner, at the point where the Corn Brook enters the River Teme. To get your bearings, the Corn Brook is crossed by the A456 Tenbury to Newnham Bridge road, just east of the Peacock pub. Although not particularly obvious as you drive over it, this is a bridge called Monk’s Bridge.

When counties were later devised, in the early 10th century, the junction of the Corn Brook and the Teme became a junction of three counties. West of the Corn Brook lay Shropshire, east of it lay Worcestershire and to the south, Herefordshire, Rochford in those days being part of Herefordshire. It was later said of this place that it was possible to stand in Worcestershire, shoot a pheasant flying over Herefordshire, and it could fall to earth in Shropshire!

From here the perambulation follows the Corn Brook upstream. The “corn” of Corn Brook is derived from an old word for crane, a bird we now know as the heron. After a short distance, the boundary heads north-east across Knighton Common, formerly known as Corn Brook Common, passing a “rushy nook” and a “crooked willow”, it then approaches May Hill and heads for the Trapnell Brook. Trapnell is a tributary of the River Rea, and the boundary follows it downstream to the Rea. The Rea was previously known as the Nene, a pre-Anglo-Saxon word meaning, simply, river. The name lives on in the nearby village of Neen Sollars. The boundary follows the Rea a short way downstream, before turning up another of its tributaries, the Marlbrook. This it follows a good way, through woodland, to the Broombank.

From the Broombank it heads south to “the Mamble people’s boundary”, across “a ford in a calf’s clearing”. When I went there to find this, there is a clearing, but no calf! However a later field name is given as ox leasow. There was no ford either, because the stream has been piped there, but there is a very old holly tree there, possibly where the calves sheltered! Walking along the Mamble boundary you realise that you are walking along a watershed. All of the rain that falls to your left-hand side drains north into the Rea, all that falls to your right flows south, straight into the Teme.

Next we follow the “Sodington people’s boundary”. Now this is interesting because today there are no Sodington people! The village that existed in the eighth century and was still there in the thirteenth century, as evidenced by records of 31 taxpayers, has disappeared. The only vestige of the old settlement is Sodington Hall, built on a re-used moated manor-house site. The site itself is very ancient, having Roman remains there, too.

The boundary carries directly along the top of Frith Common’s boundary and carries on eastwards to Menithwood, crossing the Dumbleton Brook in Brockhill Wood. At Menithwood it reaches “a loam pit between two hills”, “Stilla dune” and “Penhyll”, now known as Stildon and Penn Hall. It carries on eastwards until picking up a stream to the north of Pensax Common and heading north to the “old road”. This is the Pensax to Abberley road. This “old road” is interesting because the word used in the charter, “straet”, is only used six times in Worcestershire Anglo-Saxon charters. In all the other instances it refers to a Roman road. So it is postulated that the Clows Top to Abberley road was once a Roman road. Bear in mind that directly north-west of Clows Top is the Wall Town Fort, a Roman fort situated just east of Cleobury Mortimer, and the suggestion seems distinctly possible.

After a short distance the route leaves the road and heads for Snead Common, picks up a stream flowing east and then doubles back on itself in a hairpin bend back up a tributary. It now heads west for Stockton, before climbing a hill to “the birches” below Pensax Wood, and traverses a clearing near Heath Farm at Menithwood. Then it goes downhill again into a stream to the east of the Menithwood road.

This is described as the “foul fen”, a bit unfair for a brook full of lovely marsh marigolds in the spring! This was accurate though, because “foul” in those days referred to marshiness. From here it leaves to go through a “hedge”, no longer there, past a “crooked oak”, also no longer there, and onto the market road or “portway” to Tenbury, another ancient road, following the valley to Tenbury, and still very much there!

Our route now doubles back up the road to the lay-by at the Devil’s Pitch, and heads down a path, making a course back to the Teme.

The entire southern charter, and current parish, boundary now follows the River Teme back upstream to our start-point.

What would life have been like in late eighth century Lindridge? The scattered settlements of earlier occupation were now concentrating on new estates, like that of Eardwulf, in Eardiston. Crop-growing became more intensive, but the open-field system of mediaeval strip-farming was yet to appear. Wheat, barley oats and rye were grown, with flax planted in some places.

Woodland was important for timber and brushwood, and for grazing pigs on acorns and beech-mast. Sheep and cattle were kept on woodland pasture, possibly the role of the commons, including Frith Common, in the eighth century.

Agricultural life would have followed the seasons, as now. Would the inhabitants have noticed the change of ownership from Wiferd and his wife to that of the church of St Peter? There must have been an administrative system already in place, it probably carried on much as before. Why was the land given to the church? Was it religious fervour? We know that King Offa set great store by giving land to the church, and although the Anglo-Saxons had arrived in Britain as pagans, Christian minsters had now been founded. Worcester’s ancient records show its later Priory to be founded on an earlier minster. So Wiferd and Alta may have been following the king’s example and in so doing, demonstrated their piety. We do not know. 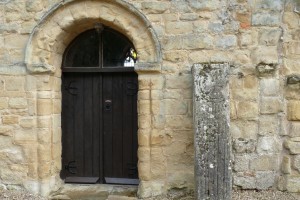 In Lindridge today there is no physical evidence of Anglo-Saxon times. Adjacent Knighton parish has a circular churchyard, thought to be a Saxon feature, and Eastham Church has some Saxon stonework, in the form of blind-arcading, incorporated into a later building. A little further afield, St Michael’s Church, Abberley, has a Saxon tomb-cover propped against a wall, and Tenbury Church has the lower half of a Saxon cross displayed in a glass case. So the Anglo-Saxons left their mark, but now I shall head through time and on to the next object, made in the sixteenth century.