For the next object we are in Elizabethan times, and at a date of 1590. Queen Elizabeth reigned from 1558 to 1603 and is known to have visited Worcester in 1575. She is recorded as describing the city as one she “lykyd well”. There is also a local legend that she visited Hunthouse Farm, in Mamble, but I could find no evidence for this. She certainly travelled extensively, and enjoyed hunting. Sodington had a deer-park in Elizabethan times, so it is not entirely unreasonable to suggest that she made a visit to next-door Hunthouse.

During her long and successful reign, Britain enjoyed stability and prosperity. Drake circumnavigated the globe between 1577 and 1580 and exploration and trade brought wealth back to Britain. Learning and literature flourished, and everyone was captivated by the discovery of new lands. Shakespeare frequently made reference in his works to faraway places and their riches. An interest in all things geographical led to the creation of maps, as a means of showing them, and thus we come to the third object.

It is by far the largest of the four objects I have chosen. It measures 16’9” by 13’9” and it is a beautiful tapestry map showing the whole of Worcestershire. It was made by a Worcestershire man and I have chosen it because it is the earliest picture of Lindridge that I could find. 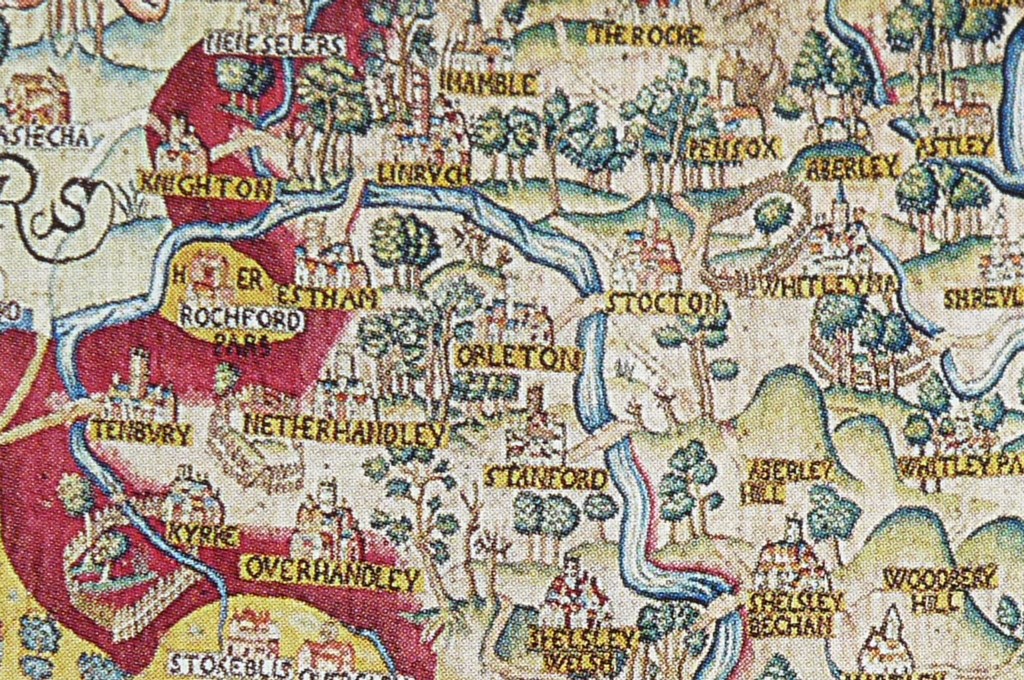 Part of a tapestry map of Worcestershire, courtesy of the Victoria and Albert Museum, London – Click to take a closer look

It is owned by the Bodleian Library of Oxford, and kept by the Victoria and Albert Museum in London. It has not been on public display since 1908, and because of this it retains vivid colours of yellow, red, green and blue. Its details can easily be seen.

It was commissioned by a man called Ralph Sheldon. He was a rich landowner who had lands in Beoley, north Worcestershire, and Barcheston in south Warwickshire. He was a Roman Catholic and related to many old Worcestershire families, including those at Kyre Park and Netherwood in this area. Because of his religion he was unable to hold high office, but he was a highly successful man and he wanted to make an impression by building a new state-of-the-art mansion in the parish of Long Compton in Warwickshire. The house was situated on the border of four counties, Worcestershire, which then had an outlying area nearby, Warwickshire, Oxfordshire and Gloucestershire.

He decided to commission a set of tapestries to hang on the four walls of his new hall, each showing one of the four counties, and each, because of overlap, showing his new house! That was fortunate because his house is no longer in existence. In the 1590’s tapestry was phenomenally expensive and represented a great show of wealth. The best expertise in tapestry-making lay in the Low Countries, so he brought Flemish weavers over to make them for him.

For the design he took inspiration from two recently published books, both highly popular, and present in every rich man’s library. These were Christopher Saxton’s book of county maps, published in 1579, and William Camden’s “Britannia”, a travelogue published in 1586. Sheldon also added roads, which did not feature on Saxton’s maps, and accurate pictures of towns and country houses. All of the houses were those of his friends and relatives!

The whole map is no longer intact, having suffered some damage, possibly during the Civil War. It covers parts of Shropshire and Herefordshire too. In all, nine counties featured in the entire map-set, including an accurate picture of the city of London, as the area depicted stretched from the Bristol Channel to London. The tapestry borders have Camden’s verses woven into them, and here is one I think describes Lindridge particularly aptly.

Here hills do lift their heads aloft, from whence sweet springs do flow

Whose moisture good, doth fertile make, the valleys couched below

Here goodly orchards are, in fruit which do abound

Lindridge is shown with its hill ridge, wooded, I like to think, with lime trees, and roads to Clows Top and to Mamble are shown. Lindridge, in an old spelling, Linruch, contains rather a lot of buildings, but unfortunately, villages are all shown the same and are not individually accurate. Worcester is shown with stone defences and the multi-arched stone bridge has two towers on it. Apart from the Severn Bridge at Worcester, other river-crossings are shown. Eastham and Stanford feature, and also shown, but no longer used, is a crossing between Stockton and Orleton.

Tenbury’s position is interesting. The town is depicted east of the Kyre Brook, despite the church and mediaeval burgages being clearly to the west and most surprising of all, there is no crossing over the Teme at all. A Kyre crossing at Tenbury is shown, and a Teme crossing is shown from Berrington to Burford, but no Teme bridge at Tenbury. We know there was one, because in 1540 the chronicler John Leland described a bridge with two stone arches. There was also thought to be a wooden bridge, crossing the river from beyond St Mary’s churchyard. This puzzled me for some time, but eventually I realised that in 1580 there had been a big flood at Tenbury. Nothing exceptional in that, except that on this occasion the flood caused the river to alter its course. Prior to that, the course of the Teme ran between the Tenbury Tump, north of the town, and the Rose and Crown pub. The Shropshire county boundary, originally on the river, continued to mark this route, long after the Teme had moved!

After the flood three further stone arches were erected on the Worcestershire side, to cross the river on its new course, this is why Tenbury’s bridge has a significant bend in it. But the story does not end there. In 1986, some huge old timbers were dredged from the river downstream from Tenbury. They were taken to Avoncroft Museum, Bromsgrove, and tree-ring dated. This indicated that the trees had been felled between 1591 and 1595. Another flood, in 1615, again severely damaged the bridge, and it is thought that these sixteenth century timbers, resting on the earlier stone arches, had been dislodged then. Tenbury was so short of cash to make the next set of repairs in 1615, that it appealed for help from neighbouring parishes. It was unable to fund the estimated £30 repair bill itself! The 1590 tapestry map shows no Tenbury bridge, the timbers to repair the 1580 flood damage were not cut until after 1591. Both facts suggest that the Tenbury crossing was out of action for some considerable time, and that the tapestry map is quite accurate.

Lindridge does not have any surviving Elizabethan features as far as I know, but two very interesting sixteenth century documents survive.

The first is an Act of Parliament from 1570, enacted to confirm the traditional rights of the copyholders of the parish. Copyholders were tenants who were given a copy of their tenancy agreements in writing. The background to this action is that Henry V111th had dissolved the monasteries in the 1540’s and given the Worcester Priory’s landholding to the Dean and Chapter of Worcester Cathedral. It appears that the Dean and Chapter had been denying the local inhabitants their traditional rights, as exercised under their previous owner.

In a response that I find astonishing, the people of Lindridge, along with people from Newnham and Pensax took the Dean and Chapter, their owners, to court. Not just locally, but to the highest court in the land! And they must have been sure of their rights, because they not only had their case upheld but it was enshrined in law. The 1570 Act confirms their ancient rights, including to have possession of all woods, underwoods and buildings on their copyhold lands, and to have common pasture for their sheep and cattle. From then on the manor court books, which were kept by the Dean and Chapter as a record of business, always had a summary of the Act of Parliament of 1570 written in the front.

The other interesting document from the 1500’s is an inventory of Lindridge church. This was taken in 1522, during the reign of Edward V1th and is signed by the vicar, Edward Ree and the church-wardens, John Bodnam and Hugh Not, the latter two surnames still surviving in the parish.

The Sanctus bell in Lindridge church

There were silver items, a chalice, patent and pix, and brass items, two crosses, two lamps, a pax, a candlestick and a censor. Of lead, were two cruets, and of pewter, twelve little shells to stand under tapers, to set on the rood screen. There were two altar cloths and a cloth hanging before the high altar. A large collection of vestments included a violet velvet cope and vestments of velvet, of changeable colour, green Russell worsted and blue damask. There were various items of linen, including banners and streamers, and a collection of bells. In the steeple were three bells, there were also a lych bell and “eight little bells upon a wheel”. These items are of interest as they shed light on pre-Reformation church practices. The ancient Sanctus bell dates from about 1480. It is inscribed Ave Maria Gracia Plena Dominvs Tecvm and has stamps thought to represent the royal heads of Henry VI and Queen Margaret. 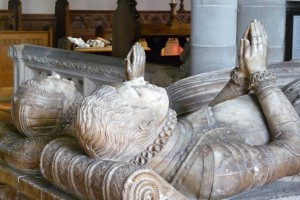 As far as I know, Lindridge has no sixteenth century remains. From the date of the tapestry, in Tenbury, is the Pembroke, a well-known inn. Another interesting Tenbury Elizabethan object is in St Mary’s church. It shows the elaborate dress of the period by way of a beautiful alabaster memorial to a Thomas Acton and his wife.

Thomas Acton deserves a footnote in our account, throwing up a further tantalising story that I have been unable to verify! It is said that the young William Shakespeare and a friend from Shakenhurst in Mamble parish, were caught poaching deer, variously said to be in Charlecote Park, Warwickshire, among other places, but also to have been Sutton Park, Tenbury. The judge who heard his case was Thomas Acton. Furthermore it is said that Shakespeare modelled one of his characters, Justice Shallow, on Thomas Acton after meeting him in court. It may well be a tall tale, but I liked it!

Well, it is time to leave the 1500’s and head closer to the present day for my final object.